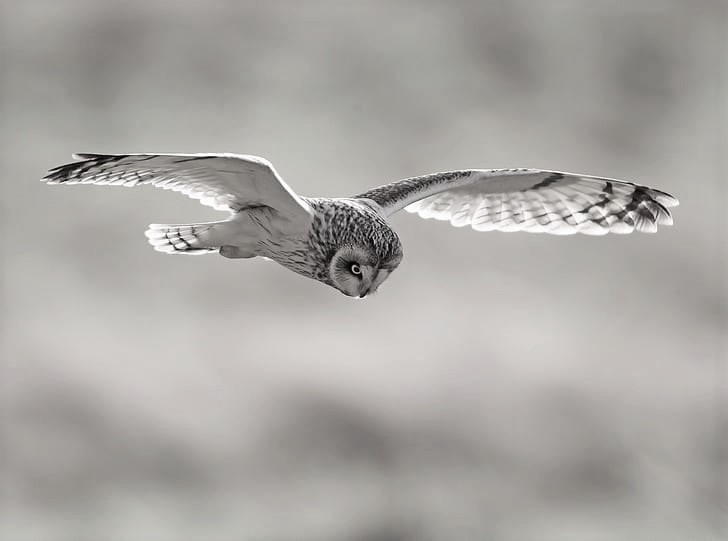 I deeply love owls. My first encounter with an owl, wasn’t an encounter. It rather was a merging and a recognition of oneness, and which I owe all to the wisdom – the great silence – of this magical creature from whom there is no separation.

I was at the age of about seventeen. I loved sitting in meditation at the edge of a forest, with the trees in my back, and a soft meadow in view which was surrounded by trees again.It was at dusk when it happened. As I gazed with half closed eyes across the meadow, suddenly I witnessed the whole landscape change form, slowly waving up and down. Also the sky was joining in this undulating movement, and so was my body and the water and air within my body. All started slowly, yet rhythmically billowing. I was so moved and intoxicated by the beauty of this spontaneous happening that I stayed in this non-reactive awareness naturally, feeling in union. A few moments later it became apparent who was causing the sky to dance, and the landscape to billow.An owl flew from out of the forest behind me, straight over my head over the meadow in front of me, and disappeared again in the distance leaving behind the most sacred silence within which all arises and falls away again. I could not have wished for a better and wiser teacher ever, showing me and opening this portal to silence. Had he had made any sound at all while approaching, it would have trapped me into reaction: “Ah, a bird…”, or “Oh, what is coming?”. Because this is what happens as soon as we see or hear something, we label it and it sort of becomes fixed. Subtly we draw conclusions which keep us from experiencing a wider perspective. By our reaction we stop the flow of revelations.This owl did not give me that chance, by its silence. It allowed me to remain in an expanded state, not separated but one with all.